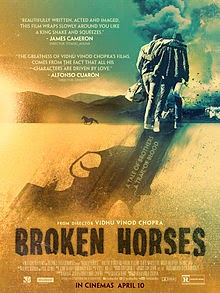 Tom Stern’s innovative use of light and shadow for the daytime, interior and night-time scenes add weight to the film, conveying the appropriate moods effectively. Sure, there are a few moments of unnecessarily heightened melodrama and if anything, we would have liked to have seen more consistency when it comes to the grittiness and dark edges. All said and done, the overriding message of Broken Horses is, of course, one of brotherly love and the fact that although circumstances might change, some bonds remain unbroken.

Shot by Clint Eastwood’s favourite cameraperson, and with Goodfellas writer Nicholas Pileggi on board as consultant, Broken Horses also gets its settings right, from its dust-track roads and dust-lined vehicles to its one-horse towns.However, should you keep waiting for all of it to amount to something more, you would be disappointed.The moral of the story for Chopra: If you want to try something new, perhaps go for something new.

In all, Broken Horses comes across as Parinda, with non-Indian actors. But then, while Parinda was a brilliant film, given its context and milieu, this one doesn’t impress as much. Watch it if you’re keen on seeing what the first Hollywood film written,directed and produced by an Indian filmmaker is like. Else, hire a DVD and re-watch Parinda.

Marquette’s performance is what pulls this broken horse along to the finish line, moving one to almost tears in a scene between him and D’Onofrio.D’Onofrio, for all his talent, cannot compete with Nana Patekar’s inimitable Anna Seth.For those who haven’t watched Parinda, Broken Horses could perhaps be a moving, serious watch. But for those who have already been blown away by Chopra’s original, Broken Horses pales in comparison.

Tom Stern’s camera work is excellent. He has a flare for wide angled panoramic shots. Some of the shots of the Wild West and Jackey’s Ranch, captured in the twilight zone are worth noticing. So is the underwater shot during the climax.Well mounted with good production and technical values, the film has an inexplicable gentleness to the narration, very characteristic of Vidhu Vinod Chopra. It will appeal to the emotionally inclined.

Broken Horses is a stellar attempt by Vidhu Vinod Chopra. The story is simple, but with the grandeur of Hollywood. If you are into crime thrillers, Broken Horses can be an easy watch this weekend.

Vidhu Vinod Chopra’s lack of clarity in making the film either completely western or Indian-inspired western. Since it is based on his own 1989 Hindi film Parinda, it is difficult to see him struggle with the plot which is edited for western standards and yet fails to achieve the purpose.