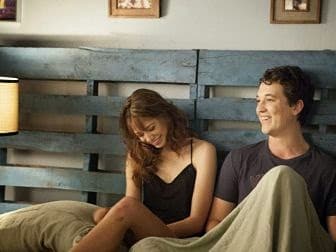 The premise has potential but director Max Nichols and his writer Mark Hammer are unable to build it into something sparkling. The initial twist – two strangers who have had s** must now get to know each other – is delicious but soon the film settles into monotony. It’s fun but Two Night Stand is hardly essential viewing. I’m going with one and a half stars.

Two Night Stand has the vibe of a reality show and the feel of a play, where most of the action takes place in Alec’s cozy apartment, in two or three rooms. Teller and Tipton both put in some charming performances. Their delightful repartee is quite clearly the movie’s strongest aspect. It keeps you engaged and is often amusing. While the plot is simple enough, this is, in essence, a pretty candid and contemporary take on young love, with its many colourful details.colourful details.

Yes, the film has its moments, but that’s it. They have all been sewed together like a patchwork quilt. What could’ve been a coming-of-age romantic film that is totally in tandem with the thought process of today’s youth, ends up being a confused affair. Sure, it makes an honest attempt at conveying a clear portrait of the modern-day hookup culture, and highlights the dishonesty of the profiles on the one too many online dating sites, the sentiments in the film still seem outdated. –

If this was actually a film about a girl and a boy — make that a young woman and a young man — talking about how to pleasure one another and busting some myths in the process, please be our guest. If this was actually a film about casual s** and two-night stands, please go ahead. There have been worst pretexts to get to that kiss. Two Night Stand isn’t as bad but, worse, it’s boring and insipid, despite all the s** talk and s**ual implications along the way. It’s a sad commentary,