Well-intentioned but over-simplistic, War Chhod Na Yaar casts a satirical eye on the hot-button issue of border relations between India and Pakistan, and turns the spotlight on the troops stationed either side of the barbed-wire fence. War Chhod Na Yaar succeeds in treating a grim subject with a light hand. Sharman Joshi and Javed Jaffrey are in good form, but the script loses steam well before the finish line. I’m going with two-and-a-half out of five. It’s not extraordinary, but it’s got some clever ideas.

WAR CHHOD NA YAAR has a unique concept. It not only projects the thorny issue in light vein, but also makes a comical comment on the politicians of both sides as well as the Chinese and American interference. There’s a lot of tongue in cheek humor and over the top amusement to drive home a message. Clearly, the director intends to say a big ‘No’ to warfare or hostility, but while the intentions are right and most honorable, what comes across on screen looks like a half-hearted, amateurish attempt. On the whole, WAR CHHOD NA YAAR is an interesting idea, coupled with noble intentions, but is treated amateurishly.

War Chhod Na Yaar, a satire on constantly warring India and Pakistan, has a few fun moments. But the few bright spots are buried in reams of amateurish craft, dreary songs, half-hearted patriotism and feeble jokes.I only wish the material had lived up to its potential.

Black comedy is a rare genre in Bollywood and hats off to Haider for bringing it to the forefront. His subject is relevant, given the many unpleasant cross-border incidents that have occurred of late. Unfortunately, a poor script and juvenile execution let the promising premise down. After a while, the characters start looking caricaturish, especially the ‘forever meat-hungry’ Pakistani army. There’s an underlying tragedy that lies at the heart of this film but it gets overshadowed by too many childish gags.

War Chhod Na Yaar would’ve been a considerably better film if it were more balanced. The Pakistanis are still made to look like a bunch of malnourished idiots who think of India as their big brother. The Indian army on the other hand, is the paragon of goodness, wit, and soldiering. Was this a necessary evil to get the film released? If it was, the war in that case is lost anyway.

The film reaches a major road block in the second half where it seems like a headless chicken trying to cross the road. Most of the conversation gets heavy and Soha’s character tends to get a bit annoying with her becoming a narrator rather than participant in the given scenario. An earnest attempt, the film fails to sustain our interest in a weak second half.

The first half of War Chhod Na Yaar has the pitch-perfect tone of a war comedy with some real gems that bind the narrative. So what happens when all jokes have been cracked and comic scenarios explored? The film begins its descend downhill. Suddenly, delightful irreverence gives way to unwarranted melodrama coupled with the makers’ lofty ideas of positive change brought on by a revolution.All said and done though, this is a start. Hope India’s second war comedy will stick to the brief.

India’s “first war comedy” starts off with spark. But soon the whole thing loses steam. Gags about Chinese products that don’t work dry up quite quickly too, so by the time we come to the point where a China-made nuclear bomb is about to go off, it all goes phuss. Pity because the theme, fronted by the two lead actors, had the potential to be a zinger.

Though ‘War Chhod Na Yaar’ is a very one-sided view of barbed-wire offences, it does nevertheless fire some mirthful missiles at politicians on both sides who make mileage out of the mythical animosity between the two countries. Very rarely do we get a chance to smile about the grim reality of war. This film gives a nimble twinkle-eyed satirical slant to the scourge of war. Warm and well-packaged with intelligent performances, ‘War Chhod Na Yaar’ flounders when it abandons the human aspect to get into the nuclear zone. Then it`s time to groan.

Faraz Haider’s War Chhod Na Yaar is a welcome and refreshing satire on wars. The Indo-Pak border counts as one of the world’s most hostile regions but Haider’s tender story dishes out a wickedly told film filled with engaging humor that will have you in splits. The commendable effort and the clever take on the theme of war puts across a more poignant message of futility of wars without trivializing the intention of it! 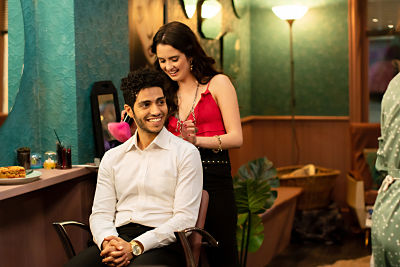