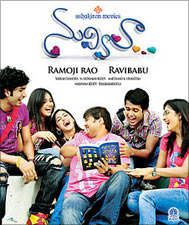 First half of the movie is neat and satisfactory. The extended gay track become a stumbling block for the narration in the second half. Ravi Babu succeeds in narrating the story with sprinkled humor and mellifluous music. A better handling of second half would have made the movie more universal. Ravi Babu has the knack of changing genres. On a whole, Nuvvila is a young film

Ravi Babu is one film maker who strongly believes that more than the actors it is the story which is important. Hence, the quality of content in his movies is usually good. Of course, it doesn’t mean he comes up with variety. It is the same formula but packed in a different and entertaining manner. As such, he is a good story teller and at the same time a crafty technician. Overall, this is a film which has good entertainment, required masala and enough ingredients to keep the audience engrossed throughout the film. As for the viewers, all genres of them would connect to it easily.

Actor-director Ravi Babu has chosen a contemporary subject for his Telugu film Nuvvila. It’s about the gen X, their aspirations, parents’ role in their lives, their confusions, their outlook and so on. It’s not that this has not been dealt with before but Ravi Babu chooses to depict a story woven around all this.The film is entertaining but the script has loopholes.Nuvvila is about the youth, by the youth (in terms of actors) but for the youth and others as well.

Despite being thoroughly entertaining the film does irritate a bit due to repetitive scenes and an overdose of adult (read gay) comedy. However, there are some truly hilarious scenes which will make you laugh like hell. First half is breezy and second half lags a bit in the middle. Climax is over the top but funny.Nuvvila is a youthful film which will appeal to the target audience and enjoyed by the people who love to watch mindless comedies.