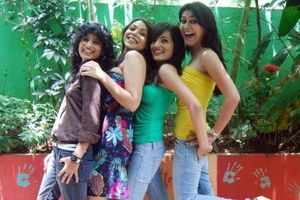 
So what’s the story you ask? There isn’t much in this wafer-thin chapter compassing their coming of age days. Director Rupali Guha starts her story with a khatta meetha feel-good feel (characteristic of father Basu Chatterjee’s films) but soon this aamras tastes like aam-ka-achar as masala is mixed in the treatment. Aamras can qualify as a decent recipe for a good novel. It’s too dilute for a film and ends up being an ordinary fare. ‘Aam’ras!


Aamras is an ode to teenage friendship: bonding, crushes, heartbreaks, jealousies, everything a blend of sweet and sour.And though the film occasionally feels like a Banegi Apni Baat type of tv serial, it develops a sweet tempo and tenor of its own. It has sensitivity too: that Jiya has a hearing problem shows how new Bollywood is willing to make progressive moves within the limits of commercial cinema. But the Parimal Tripathi gag – a character who dresses the same way as Dharmendra in Chupke Chupke – doesn’t work. Pre-teens and early teens will surely find Aamras as refreshing as nimboo-pani.