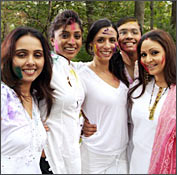 There are some films that are so bad, they’re actually great fun. Karma Aur Holi is exactly that kind of film. Take a big group of friends and head to the multiplex, a good laugh is guaranteed. One out of five for director Manish Gupta’s Karma Aur Holi. It’s an unholy mess and I’m amazed Sushmita and the other actors didn’t have the good sense to chuck this script into the bin.

you can’t possibly take this film seriously. I dare you to try, with a bevy of non-actresses thrust into stereotyped roles. With no sense of plot development or character consistency. With a few actors you genuinely feel sorry for, like Sushmita Sen, Suresh Oberoi and even good ol’ Vincent Curatola of the Sopranos. Watch Subhash Ghai’s Karma. Or Ketan Mehta’s Holi. The two titles meeting in an unholy mix is karma you can do without.

Poorly dubbed and pathetically styled, Karma Aur Holi makes the Hindi commentary and outrageous costumes in Tele Match sound and look superior.Having said that there are some poignant moments too – like the one where Sujata buttons up after having had mechanical s** with her husband. But they are far too little and only just fleeting.Karma Aur Holi has been rated as ‘A’, which probably stands for ‘asses’ because it’s what most of us felt like after walking out of the preview theatre. You’d rather spend your ticket money on buying Satyam shares. 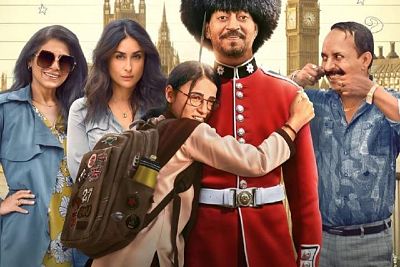