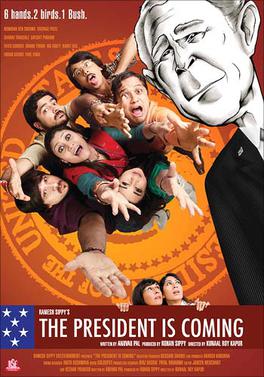 THE PRESIDENT IS COMING, helmed by debutante director Kunaal Roy Kapur, is a rib-tickling story about the President’s visit to India and the Indian youth. In fact, it’s the first-ever ‘mockumentary’ that lampoons Bush and also the desi youth. The humor here is very tongue-in-cheek and even though the making is amateurish, you can’t help but break into guffaws at several points.On the whole.THE PRESIDENT IS COMING offers laughter aplenty and that is its biggest USP. Recommended for the multiplex junta.

A guaranteed good watch, The President Is Coming is a light-hearted, tongue-in-cheek comment on our obsession with the White man and his world. It is in fact a sharp comedy done in ‘mockumentary’ style – an original take on the frenzy surrounding US President George Bush’s visit to India in 2006.The President Is Coming is an enjoyable film that pushes the boundaries of conventional storytelling. Three out of five and a thumbs up. Don’t miss this film or you’ll regret it.

The President is Coming is an amateurish, yet funny satire that not only lampoons Bush, but also takes a rib-tickling dekko at the stereotype of the Indian youth.Set against the US president’s visit to India, the film is a behind-the-scenes of the US consulate which has been given the arduous task of selecting one suitable young Indian who will shake hands with Dubya. Needless to say, this fortunate (read unfortunate) Indian will be the sole representative of India’s burgeoning youth population and will have to showcase the mantra of `India Shining-Rising-Rocking,’ all in a split second.

There’s funny-funny. And there’s sharp wit. The President Is Coming is a delightful combination of both.At a pace where there’s no scope for a single dull moment, debutant filmmaker Kunaal Roy Kapur adapts Pal’s satirical play for screen with satisfying results.The President in question might be leaving (office) in the next few days. But this film and its frisky laughs will entertain us for a long time to come.

Small can be tall, a budget that’s low can glow, newcomers can be with you the rest of your life’s summers. Forget the popcorn-`n’-chais, just buck the formula guys.All said and guffawed at The Prez has its moments of absurd humour. And because of its fiercely independent spirit, this invitation to ha-ha is a must for every viewer who cares for the experimental. Never mind the flawed packaging.

The President is Coming is a hilarious film that will leave you in splits. Thankfully its only 90 minutes and therefore you don’t get bored or tired. You are engrossed all through the film and not for a minute do you find any one hamming or over acting. Konkona Sen Sharma is brilliant as you would expect. But it’s not just her. Anand Tiwari is simply perfect too as is Vivek Gomber. There are quite a few surprises in the film and each of the actors pulls it off with perfect ease. Shernaz Patel and Shivani Tanksale are equally good too.At the end of the day The President is Coming is a film that I would definitely recommend seeing. It will give you the perfect laughter dose to start the New Year

What better way to begin the year but with a hearty laugh, loads of fun and a series of poke fun jokes on the most comical, goofball political leaders of all times George W Bush. ‘The President Is Coming,’ a political spoof on US outgoing President Bush is your ticket to wholesome fun at the Box Office this week.

Laughing hysterically is what this film will have you do. Based on the 2006 visit of the US president George Bush to India; the film highlights the meeting of the US president with one young Indian responsible for shaping ‘New India’. Taking off from there the film amplifies this event and weaves an out and out comedy feature that is worth watching.