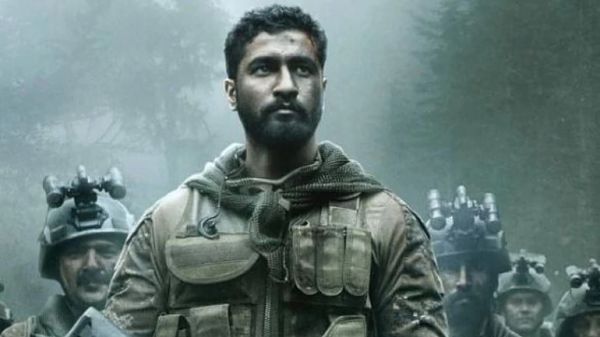 Ultimately there’s a lot to admire here, but because it can’t shake off its unmistakably filmi sensibility – which is inherently at odds with the no-nonsense tone it aspires for – it proves thrilling only in parts. The film is too long at nearly 2 hours and 20 minutes and as a result it runs but never flies.I’m going with three out of five for Uri: The Surgical Strike.

Uri: The Surgical Strike is an unabashed love letter to the Indian army. If you want nuance or insight into the hearts and minds of brave men and women who willingly put themselves in the line of fire, you won’t find it here. Writer-director Aditya Dhar positions soldiers as superheroes who might grieve but they never doubt or question their place in an increasingly complicated and polarized world. Unlike Kathryn Bigelow’s Zero Dark Thirty, which clearly was an inspiration, there is no room here for moral ambiguity. In Uri, we get men on a mission. They are propelled by patriotic fervour and aided by fulsome background music.

Aditya Dhar’s direction is very good, especially considering that this is his debut film. The film was neither easy to write nor easy to narrate, but Dhar does both with élan, and that’s his victory.On the whole, Uri – The Surgical Strike is a box-office winner. It will do very well in the cinemas and grow by positive word of mouth. Business in the cities and good multiplexes will be better.

The target is unprepared, outnumbered and out of bullets. The Pakistani police, like our cops throughout the history of Indian cinema, arrive late to the scene. The Indian army, on the other hand, has everything under control. That efficiency may feel fantastical to an Indian audience, and Uri becomes therefore less a feature film and more an advertisement. Fantasies are about wish-fulfilment. Uri made me wish that Rajit Kapur, this soft-spoken man with no resemblance to Vivek Oberoi, was indeed our Prime Minister.

The soldiers give up their today for our tomorrow and no words can signify or repay the sacrifices they make for our country. Uri puts a spotlight on the thankless job they do with passion in their hearts and fire in their bellies. The film is a fitting tribute to the Indian Army conceptually but cinematically, it’s not a film without flaws.

If that doesn’t mar the experience of the film, I don’t know what does. For a film about active blood-letting, it is curiously bloodless. There are not enough of the rousing goose-bump inducing moments that such films come armed with. When a character shouts, how’s the ‘josh’, you want to add to it: where’s the ‘josh’?

What Dhar squanders on the screenplay, he makes up for in the details. Stefan Richter’s carefully designed and executed action scenes, Sashwat Sachdev’s thunderous background score, sound mix, sound design and special effects simulate authenticity. As far as war dramas go, Uri: The Surgical Strike is a confidently made film that comes out guns blazing. And when the guns are not blazing, Kaushal certainly is.

Uri: The Surgical Strike is clear from the word go as to which political party it caters to, and makes no secret of it. Modi and National Security Advisor Ajit Doval (Rawal) is seen in practically every scene and is part of every meeting that involves discussions on the surgical strikes. The timing of this film couldn’t have been more perfect.Keeping the affiliations of Uri the film aside (which is a task in itself), it is a decent film for most parts. The first half is far more gripping than the second. Post intermission, the makers themselves seem over-excited, to the point of losing control of the narrative.

Following the roguish terrorist attacks at Uri Army Base camp in Kashmir, India takes the fight to the enemy, in its most successful covert operation till date with one and only one objective of avenging their fallen heroes