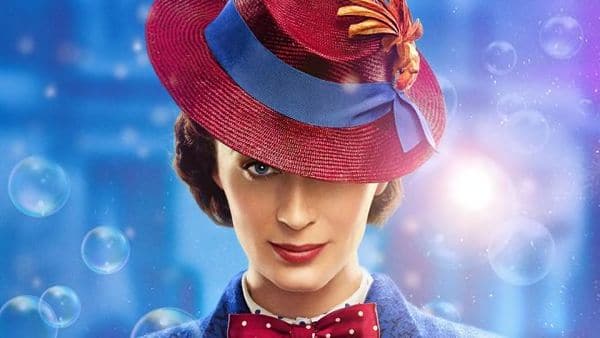 If the old Mary Poppins means a lot to you, I suspect the new one might come up short. The uplifting tone gets suffocating at some point, the messaging hammered into your head throughout. It’s terrific to look at and there are some charming cameos too, but ‘supercalifragilisticexpialidocious’ is not a word I’d use to describe it.I’m going with two-and-a-half out of five for Mary Poppins Returns.

And yet, the film feels more manufactured than magical. Everything is designed to teach and uplift – so the lyrics include lines like: when life is getting scary, be your own illuminary. Or when troubles are incessant, simply be more incandescent. Which is well-intentioned but also a bit of a snooze-fest.If you have young children, you might consider giving Mary Poppins Returns a chance. I think they will enjoy it. There is less fodder here for adults but perhaps like me, you can distract yourself by admiring the sharp cut and fit of Mary’s coats.

Director Rob Marshall is the authority on musicals, he’s directed movies like Chicago, Nine and Into The Woods. So he’s perfectly at home with the song, dance and elaborately detailed choreography of Mary Poppins Returns. The film is a homage to Julie Andrews’ original and this 2018 version, with a bizarrely satisfying and unabashedly pastiche approach, is a pure delight for children and adults alike.

Mary Poppins Returns arrives during a period of great resurgence for old-fashioned Hollywood musicals, with La La Land and A Star is Born doing tremendous business, not to mention Marshall’s own movies – Chicago, Into the Woods, Nine. It certainly isn’t his best, but a spoonful of Emily Blunt certainly goes a long way in making the mediocrity go down.

55 years after the first film, the magical nanny Mary Poppins returned to the big screen. But unlike the previous movie, this one’s fails to cast its spell like I would’ve expected it to. The performances are good and the visuals are great but nothing else works apart from that. The songs fail to grab your attention and more or less all of them sound similar. The plotline is wafer thin and storywise there is nothing new. Not that I was expecting a great story but the movie lacks enough magic and often bores you.

Now an adult with three children, bank teller Michael Banks learns that his house will be repossessed in five days unless he can pay back a loan. His only hope is to find a missing certificate that shows proof of valuable shares that his father left him years earlier. Just as all seems lost, Michael and his sister receive the surprise of a lifetime when Mary Poppins — the beloved nanny from their childhood — arrives to save the day and take the Banks family on a magical, fun-filled adventure.