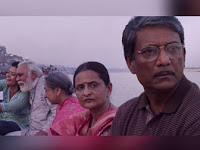 Death, and the awareness of one’s mortality are key themes in Mukti Bhawan. Yet the film is a surprisingly charming father-son story filled with laughter and unexpected moments of tenderness and humanity.Mukti Bhawan is as much a celebration of life – complete with all its complexities and paradoxes – as it is a meditation on the harsh realities of getting old and dying. It is both poignant and uplifting.Beautifully shot and although languidly paced, Bhutiani delivers an evocative drama that has surely got to be one the best films you’ll see this year. I’m going with four out of five.

Mukti Bhawan is a film about death but it teaches you about life. On the Ghats of Banaras, amidst corpses, debris, ancient rituals and ruins, director Shubhashish Bhutiani finds joy, laughter, tenderness and a unique serenity. He tells his story with a measured pace and delicate hand. Mukti Bhawan has a stillness that is rare to find in the movies these days.Any film that can get you laughing about death deserves to be seen. I’m going with three and a half stars.

There’s much to like about Mutki Bhawan. It brings to us themes which are either ignored or dealt with in our cinema with mawkishness and heavy sentimentality. Bhutiani removes the cloyingness and replaces it with a moving matter-of-fact acceptance of the final destination: this is a director to watch out for. Everyone makes us watch, particularly Adil Hussain, who is pitch-perfect. He is unshowy yet fully visible, and I couldn’t take my eyes off him.

The plot is too skimpy and with its languid pacing, the movie eventually seems a bit indulgent. The filmmaker’s exposure to slow, contemplative festival films becomes apparent. But the unassuming characters and the humour make it a delightful watch. If in-your-face Bollywood blockbusters have bored you to death, Mukti Bhawan is your salvation.

In the end, rather than being about the heavy religious stuff, it is about universal human drama. As a father and son reconcile, it is near heart-breaking. As an old man and his grandaughter sneak out for bhang, it tells you that the most devout have mischief in them. Bhutiani gives death its due dignity, and yet retains its objectivity and subtlety. It makes you laugh, and cry, and think and question. It’s what good cinema and storytelling are meant to do.

Ageing and mortality lie at the heart of the achingly tender Mukti Bhawan. But, more than anything else, this subtly comic and profoundly wise film celebrates life and its complex truths and revelationsMukti Bhawan is a small, spry, sublimely beguiling essay that bears the weight of its solemn theme without the faintest hint of a stumble. If there is only one film that you want to see this week, this month, this year – or this lifetime – let it be this one.

As his worldly-wise significant, she may no possess much depth or soul mate fodder but Geetanjali Kulkarni makes it well meaning enough not to be viewed unkindly. Bhutiani finds a perfect antidote to their complexities in Palomi Ghosh’s radiant presence. Death scares, but the journey to Mukti Bhawan is strangely elevating in its perception of life and beyond.

The concept of preparing for a peaceful passing in the most blessed place in India is life affirming and comforting. It’s no easy task dealing with the inevitability of death, with the subject of losing a parent and balancing that with humour, warmth and gratitude. This is the most significant achievement of Bhutiani’s debut feature.

A son reluctantly accompanies his dying father on a trip.