Any Body Can Dance 2 Movie Review 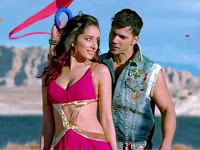 If only director Remo D’Souza had curbed his enthusiasm and trimmed this film by a good half hour, it wouldn’t feel like such a slog. Despite all the high-energy up on screen, you feel drained after 155 minutes of non-stop song and dance. I’m going with a generous two-and-a-half out of five for ABCD2. Sure anybody can dance, but it takes more work to keep an audience consistently engaged.

Like most dance movies (made in the West or Bollywood), the malady we are hit with is that while the dancing is professional, the writing is amateur. So, you whoop and whistle when the dances are on. But stifle a yawn between the gravity-defying grooves. The music is a let-down as is the Shraddha-Varun-Lauren Gottlieb love triangle.The patriotic fervour in the climax brings a lump to the throat. If only the film had been 15 minutes shorter, the ‘Jai Ho’ would’ve resonated more!

For those who love larger-than-life entertainers, ABCD2 promises entertainment galore. Remo D’Souza gets it right yet again! ABCD2 hinges on a thin plot, but the drama [second half], choreography [spectacular] and visuals [breathtaking] more than make up for it.However, it’s the finale act in #ABCD2 that deserves an applause. Merging patriotic fervour with drama was a master stroke. Clap-worthy!ABCD2 promises to dance into your heart and also dance its way to success at the box-office. Another SURE-SHOT HIT on the cards. Watch it!

On the whole, ABCD – Any Body Can Dance 2 is a surefire hit. It has hit music, great choreography, brilliant sets, outstanding camerawork and superb masala for everyone. It will easily join the 100-crore club. Its opening day and opening weekend’s collections may be the best of this year so far.

Our verdict? You should watch ABCD 2 irrespective of whether you are a dancer or not, because the performances more than compensate for the forced emotions, poorly-written dialogues and the badly-woven storyline.

The build-up, however, is both — clumsy and grating — what with nearly every dialogue uttered in the first fifteen minutes crying ‘cheater.’ Equally tedious is Dhawan’s attempt to rope in a drunkard Prabhudeva as mentor.Because of its poorly paced beginning, ABCD 2 feels a bit of stretch at 154 minutes.

The film sets out to prove that all of us can do with second chances, and that Indians can do hip-hop as well as the rest of the world (which we can easily believe given the astonishing degree of expertise we see on our reality shows) But a dance movie needs to electrify. That’s missing: all the I-love-my-India drippiness overwhelms the choreography. And why is it so long? It just goes on and on.

But then, the dance is so amazing and so baroque in ABCD 2 that you can’t take your eyes off the screen. It is one of those rare films where you need to pacify your Attention-Deficit-Disorder-ed self because you don’t want to leave the theatre without seeing the end credits roll. In all, this week’s big release is a lovely watch, and will leave you by saying, ‘Naach Meri Jaan!’

Everything is larger than life in this unidimensional portrayal of a universe where passion for dance overshadows all else. Despite its rather lame storyline, ABCD 2 does not scrimp one bit on melodrama. It throws the whole kitchen sink into the attempt to generate fervour for the fluttering flag.That pretty much is the story of ABCD 2: it shows us a great deal, but tells us little. For dance freaks, there is much on offer. For lovers of cinema, ABCD 2 is a hazy blur of a movie.

BCD 2 is a complete entertainer filled with delightful dance performances. Undoubtedly, India’s best attempt at making a wholesome dance film. Every dancer in the crew is pitch perfect and Remo D’Souza deserves a ‘This Is It’. What’s Bad: Whilst Remo makes sure there is nothing missing on the dance front, the plot takes a backseat. In terms of story, the screenplay is mediocre. Also the overstretched run time is a downer for a 3D film.

He needs to be applauded for extracting some of the best dance movements out of his lead actors Varun Dhawan and Shraddha Kapoor. Despite the fact that the film is devoid of any concrete story as the whole, it solely concentrates on the basic premise of dancing, around which the movie is based. On the whole, ABCD – ANY BODY CAN DANCE 2 makes for a good viewing and this film will surely find its way to its target audience – the youth, as the film has the right mix of content and visuals in it.

ABCD 2 is, without doubt, about mesmerising dance sequences and its equally impressive dancers. Trouble is, it’s reduced to a joke every time the music stops and the characters are made to talk. The dialogues are poorly written and the plot is so thin that you want to tear it apart and beg Remo to stick just to the dance sequences.Our verdict? You should watch ABCD 2 irrespective of whether you are a dancer or not, because the performances more than compensate for the forced emotions, poorly-written dialogues and the badly-woven storyline.

The film suffers majorly from poor writing and poorer editing.  The film in the second half is as sluggish. In short, if you are a DID/Jhalak Dikhhlaa Jaa/Just Dance fan. If you have broken your fingers, sending a thousand messages to save your favorite contestants on reality shows!! If Dharmesh, Punit, Cockroach, Raghav are familiar names who bring a big smile on your face, then you must watch ABCD 2.

Synopsis: Directed by choreographer turned filmmaker, ABCD 2 is the real life story of the struggle of choreographers Vishnu and Suresh from a Mumbai suburb who go on to win the World Hip-Hop dance championship.