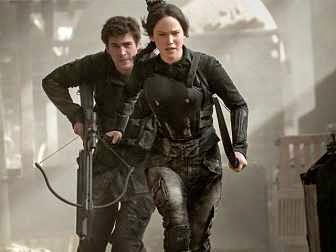 Leaving us with more question marks than full-stops, the film never feels like a stand-alone piece of storytelling in the way that the previous two movies were. It’s skillfully mounted and competently enacted, but you’re going to wish you didn’t have to wait a whole year to see how it all ends. I’m going with two-and-a-half out of five for The Hunger Games: Mockingjay – Part 1.

The film is a buildup. Colours in D13 as opposed to in the colourful Capitol are deliberately drab and performances, restrained. This is meant to highlight the contrast between the two zones. While it is not as fast-paced as its predecessors, this is however, essential for fans of the series.

In which Katniss takes the backseat — you can call Mockingjay – Part I that. For, having split the final book into two films, there is little to do in the third edition of the Hunger Games franchise but build up to the finale next year. If Mockingjay – Part I keeps the fires burning for Part II, it is because Lawrence is again so inherently believable and guileless as the helpless elder sister cast into the role of world saviour that all our sympathies lie with her — the permanently watery eyes notwithstanding. There are no big-ticket fighting scenes in Mockingjay – I.

While it may be an excellent bridge between parts 2 and 4, the film seems half baked when it ends after over two hours. The Hunger Games: Mockingjay Part 1 could have been better edited and scripted. But despite its flaws, it does have a few scenes that will both move and disturb you to the extent that the next time a political leader gives a public speech, you just know that someone is going to raise the three finger salute.

Ever since the Harry Potter juggernaut split their final story into two separate films, it’s become standard practice in Hollywood for every successful franchise, regardless of whether or not the story is there. Mockingjay – Part 1 is a serviceable entry into the conclusion of Katniss’s saga. It boasts some imaginative visuals, a few truly thrilling moments, and standout performances from Lawrence, Banks, Harrelson, and Hoffman, to whom the film is dedicated.Still, even with Hoffman’s subtly brilliant reaction shots, it does not seem to be the type of movie that fans will revisit on its own. This half is part of a whole in the most cynical way.You say you want a revolution? They’ll get to that next yea