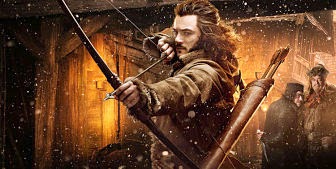 Hobbit: The Battle Of The Five Armies English Movie Review

Clocking in at 2 hours and 24 minutes, The Hobbit: The Battle of the Five Armies is the shortest film in the series. There’s awe and spectacle and some nice light-hearted moments too, but it still pales in comparison to Jackson’s original LOTR trilogy. For Tolkien nuts though, understandably it marks the end of an era. I’m going with three-and-a-half out of five.

The battles are indeed mammoth and this is undoubtedly the most deadly of the Hobbit series. The visuals, sense of immersive fantasy, wonder and detailing, are completely on point. Jackson has managed to magnify all the best elements of the previous films and negate almost all of the melodrama to create a well-balanced and precise presentation that never drags its heels. There’s even a snatch of romance – between Fili (O’Gorman) and Tauriel – as well. Everything that fans will expect to see in such a film is in here, times ten. A grandiose end to the three-part saga.

the final installment to the Lord of the Rings prelude is a thumping, thrilling success. Quite marvellous when you’ve used both your trump cards — Gollum and Smaug in the first two. Realising the risk of orc fatigue and wartime déjà vu, he paints an emotional texture around the adventure with a slightly Shakespearean impression of the Kili-Tauriel romance whilst elaborating on the mutual affection between the dwarves and Bilbo, unlike its vague source, that’s grown deeper over the course of their prolonged interaction. Sounds a lot like how I feel about Peter Jackson’s Middle Earth epic.

Enjoyable as Jackson’s ability to fuse storytelling into a series of fight sequences, The Battle of the Five Armies isn’t a gripping watch. In fact, it drags from time to time. For those who know The Lord of the Rings films, there are patterns — in terms of characters, devices, the way the story unfolds and even camera shots — that Jackson quite obviously replicates in The Hobbit.

Darker and more sinister than previous editions, the footage of elves, dwarves, orcs and many other creatures of different shapes and size using hammers and boulders to silence each other with evil bats in the sky and bizarre earthworms undulating on land, the childhood fantasies in you blossom all over again. Jackson brings the adventurous side of cinema to life and here he signs off with a blast.

Given that the screenplay is pretty average, any other director would have turned The Hobbit: The Battle of the Five Armies into a blunder of a film. But not Peter Jackson. He knows exactly how he wants his story to play out. He makes a grandiose statement with the set-pieces and the entire battle scene is the stuff of legends. The film falters a little at the start, and some plot points never materialize. But that’s alright, considering how the events are nicely tied to the first LOTR film. It’s finally time to say goodbye to Middle-earth, so do go and watch the film.