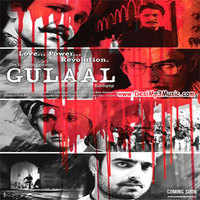 Accuse him of thinking abstract, but you cannot accuse Anurag Kashyap of following the stereotype. In GULAAL, the storyteller attempts to tell multiple stories in one film. Student politics, a separate state for Rajputs, an intense love story that has a disastrous end… Kashyap’s GULAAL is intelligent, intense, disturbing, poignant and expectedly, cerebral.On the whole, GULAAL is interesting in parts. The film may appeal to those looking for a change from the run-of-the-mill fares week after week. Its business will be best at multiplexes of metros.

Anurag Kashyap leaves behind the emotional atyachar of Dev D for an equally violent and chaotic world of student politics in Gulal. Of course, according to reports, he made Gulal much before his post modern take on Devdas. Hence, the relative roughness of script and characterisation that fills you with ennui, as you try to keep pace with the on-screen degeneration of love and politics. However, the effect does remain largely hypnotic as Kashyap once again uses cinema as a powerful medium of social comment. With its protagonist’s nightmarish ambitions to change Indian democracy into an exclusive monarchy of a single community, Gulal becomes a topical critique of every contemporary political movement that talks of the supremacy of one community or region over the rest.

These are, however, mere nitpickings in a competent, compelling film that is in equal parts humorous and courageous. Unlike No Smoking and even Dev D to an extent which alienated some audiences because of their indulgent storytelling style, this one is not a difficult watch.I’m going with three out five and a thumbs up for director Anurag Kashyap’s Gulaal; it’s provocative yet poignant, and that rare kind of film that transports you bang in the middle of its action. Watch it to understand why Anurag Kashyap is one of the most exciting voices in Hindi cinema today.

Anurag Kashyap has faced seven long years and a tremendously uphill struggle to make Gulaal, and it is heartening to see the stylish auteur throw himself headlong into a project this grounded. He doesn’t completely pull it off, but this is a fantastically watchable film that scores high on moments.As for the end, lets just assume that the director, like Kay Kay Menon’s wonderful character, had a bit of a Democracy hangover.

Anurag Kashyap inhabits a nasty, brutish space that every so often, like a volcano, erupts to spit out its molten venom. It can be an overwhelming, sometimes suffocating experience, but an immensely exciting one too. As with Gulaal. You’re hooked right from the dramatic opening sequence and the pace keeps building up with a power that can overwhelm you with a sensory overload, but fulfils its promise in the climax.

Anurag Kashyap sets his film in the blazing deserts of Rajasthan and traces the cause of unrest to the dissolution of the princely states after India’s independence.He chooses to go beyond the popular perception of bravery and chivalry in Rajputana and through it questions the larger albeit not entirely similar issue of Kashmir.Watch Gulaal it’s a good film that could have been much better

Bollywood has witnessed enough of Bihar-based politics. Anurag Kashyup takes us to new land and breaks new ground with Rajasthan’s rajniti. Gulaal is a complex but compelling narrative set around the members of erstwhile royal community who want to claim back their Rajputana province and royalty regime from the democratic government. For those who love undiluted dry colours of cinematic drama, indulge in Gulaal this Holi.